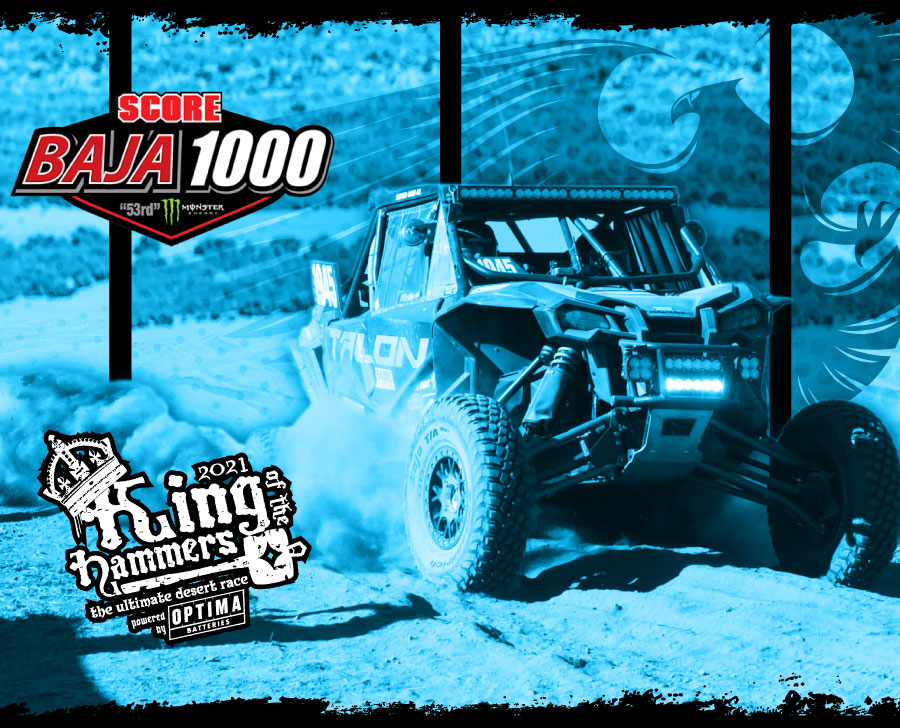 Although races like KOH and Dakar are growing in popularity the Baja 1000 is the granddaddy of all off road races and will forever be the most recognized the world over. This years 930 mile course was one of the toughest many had ever seen, running south along the Pacific then crossing over to the Sea of Cortez before turning back north to Ensenada. Off road racing and off road racers are not the bulk of our customers. As a matter of fact they make up only a very small portion of our sales. Off road racing is however a big deal when it comes to testing and developing products that will last in “normal” environments. We use off road racing to test our product in the harshest conditions possible to make them better for everyone else.

In an interesting turn of events the winning UTV Pro N/A team of Jamie Campbell had another brand jack on their car and decided to carry our Co2 jack as a backup just in case. Just in case became a reality and they needed it to change a flat a few miles from the finish. A couple months later Jamie moved the jack over to his 2 seat race car and raced a local race and then the Parker 250 a few weeks later with the same jack on board.

Adrian Orellana drove the entire 930 miles himself, finishing 2 nd in class. His team uses Pro Eagle exclusively and they put their jacks to work overcoming some vehicle issues along the way.

Matt Burroughs not only took home the 2020 UTV Pro Turbo points championship but the overall series points as well. This is the first time a UTV has ever won the overall points, beating out Trophy Trucks and ALL other classes.

Matt and his team also use Pro Eagle jacks exclusively and have for years. Wayne and Kristen Matlock not only did well in Baja but a few weeks later they packed up and headed to Saudi Arabia to race in the Dakar Rally. Can you guess what jacks they brought along for the nearly 2 week long race? Pro Eagle of course! 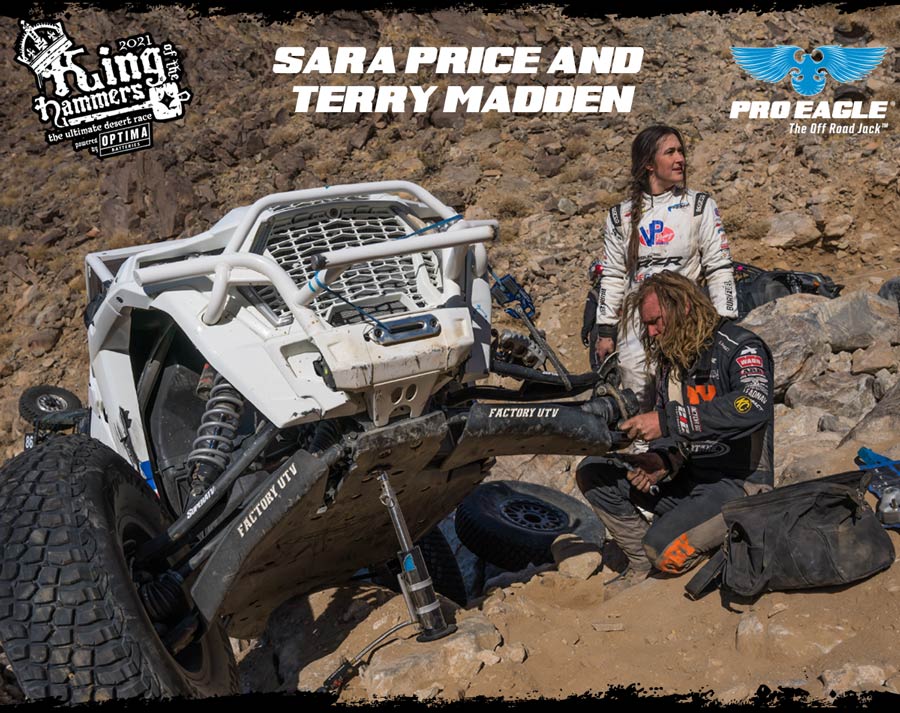 King Of the Hammers has gone from a single day event with a handful of friends and competitors to 9 days worth of events and 8 different races.

Competitors come from all over the US and even many from other countries. They arrive 1 – 2 weeks prior to the first “official day” of KOH so they can get acclimated to the environment and to start testing and pre running.  Since the race location is so remote in the California desert, having what you need with you and having that product work as it should is extremely important!  We have always been good at making sure our customers and competitors had proper working jacks but last year we decided to offer jack tune ups and repairs on site. It went over so well that we decided to continue it this year and expand the amount of days that we offered the service.

Off road racers are NOT kind to their tools and it seems because our jacks are physically on the ground, they take the brunt of the punishment. We were busy changing out fluid, installing new wheels and when
needed we replaced full pumps.

It wasn’t all work though, we hosted the 4th annual Pit Crew Competition in our booth on Tuesday evening and once again it was a fan, racer and crew favorite event that week.
The team of Jason Blanton won the truck class and the S3 Motorsports team won the UTV class. The winning teams took away a prize package worth over $5000 in product donated by some of our industry partners like Buggy Whip, Pelican, Boxo Tools, Power Tank and HCR Suspension. 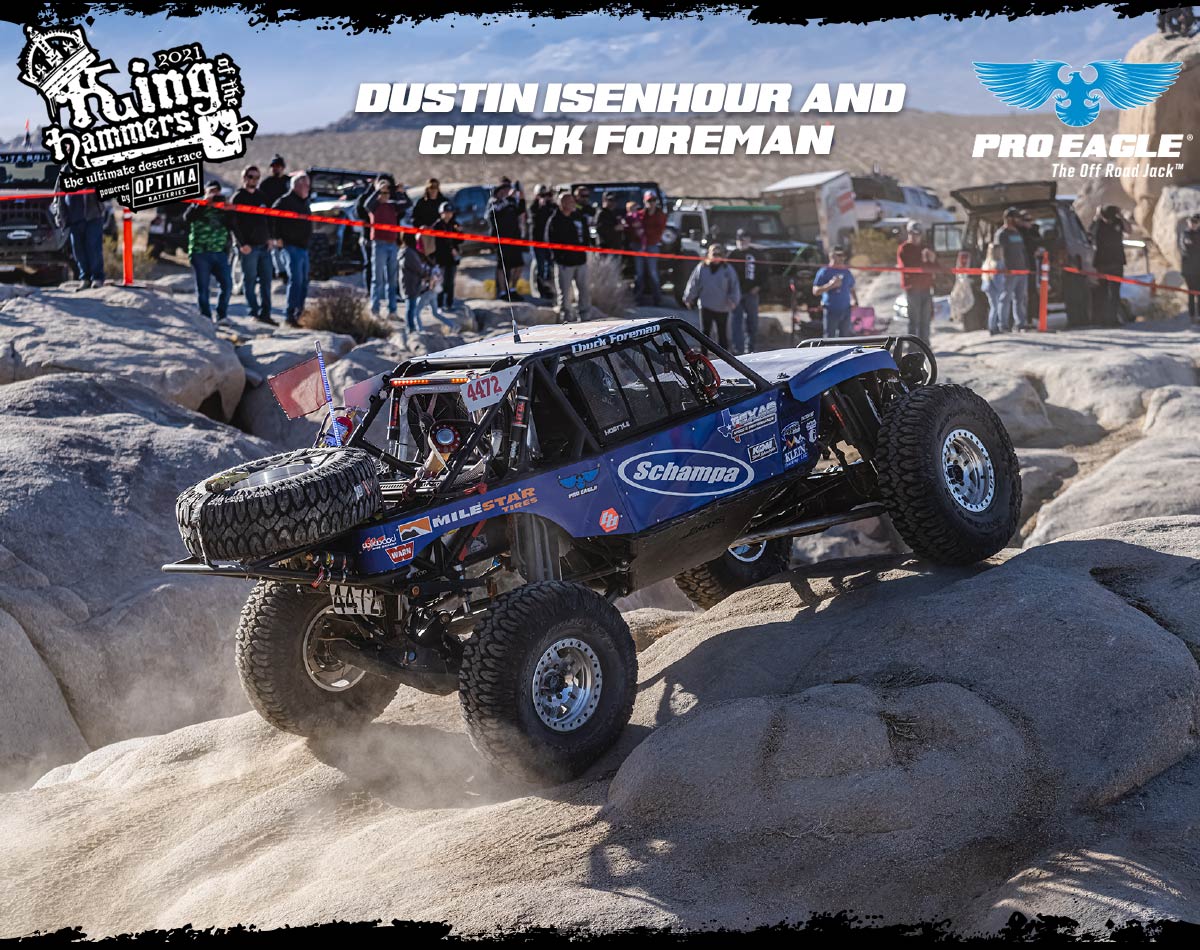 We even had a last minute addition with Class 11 racers that did their own competition. It was a blast to watch and will be a permanent addition to the show next year. Our very own General Manager, Chuck Foreman participated with the team of Dustin Isenhour in the 4400 race on Saturday. They finished 32 nd out of 80 starters. They carried our Phoenix Co2 jack on the truck and obviously our Beast and Kratos jacks in the pits.

Our jacks can be found in nearly every pit at KOH and that really says a lot about our product. It truly is an unforgiving environment and teams are often tired and worn out so having a tool that makes working on a big, heavy, dirty, hot race vehicle easier is important and worth every penny. It makes us proud to see so many of them out there being used. Many of the jacks were carried on or in the race vehicles as well. Once again this year our Phoenix Co2 jack was on the winning UTV and well over half of the other competitors.

KOH 2021 was cold, windy, wet, hot, dirty and downright miserable sometimes. It was also fun, exciting, challenging and we can’t wait to go back next year. Some of you may have noticed the new style of mounts that we have already started shipping. We have made some improvements that have increased user satisfaction. In an effort to make the insert and removal of the jack easy and effortless the fit had to be a little on the loose side. The loose fit has led to some extra wear but mostly it causes unwanted movement and noise. We solved that by adding two straps that are fed through holes in the mount and then hold the jack tight to the mount.
In addition we have reconfigured how the handles are stored under the jack to allow for extra space in the center of the mount. More on why we made this change is below in the part about new products. When we released the 1.5 ton Talon it came with a grab handle on the top of the jack. It made it easier to carry and maneuver the jack and we honestly never expected it to be as much of a hit as it was. Users with 2 and 3 ton jacks started asking for handles for their jacks, which we did make them available soon after. In seeing the success we had with the 1.5 ton handle, we have now added it to ALL new production jacks. (It is possible that some vendors have older inventory in stock without handles installed) From the beginning we have been experimenting with different coatings on the jack hardware to keep them from rusting. After many changes with little success we decided to move to all stainless steel hardware. You may not notice this change, some may not even care but if you carry your jack in a way that it is exposed to the elements, it will be a welcome improvement. We not only want our jacks to work perfectly, we want them to look perfect for many years to come. We talked to our industry partners at Boxo Tools and asked them to help us create a small tool kit that could be stored in our mounts under the jack. They designed 3 kits, one specific kit for each size jack / mount. Each kit consists of 3 different, most popular size, sockets, breaker bar, extension, valve core remover and on the 2 and 3 ton versions there is extra space for wheel lock keys or other vehicle specific tools. Boxo is offering their lifetime warranty on the tools to give you peace of mind. The tool kit fits snugly between the jack handles inside the mount and the jack sits on top of it. Once the jack is in place the kit is out of sight and inaccessible. After the jack is pinned in place and a padlock is added, your jack and tools will be safe and secure until you need them again. 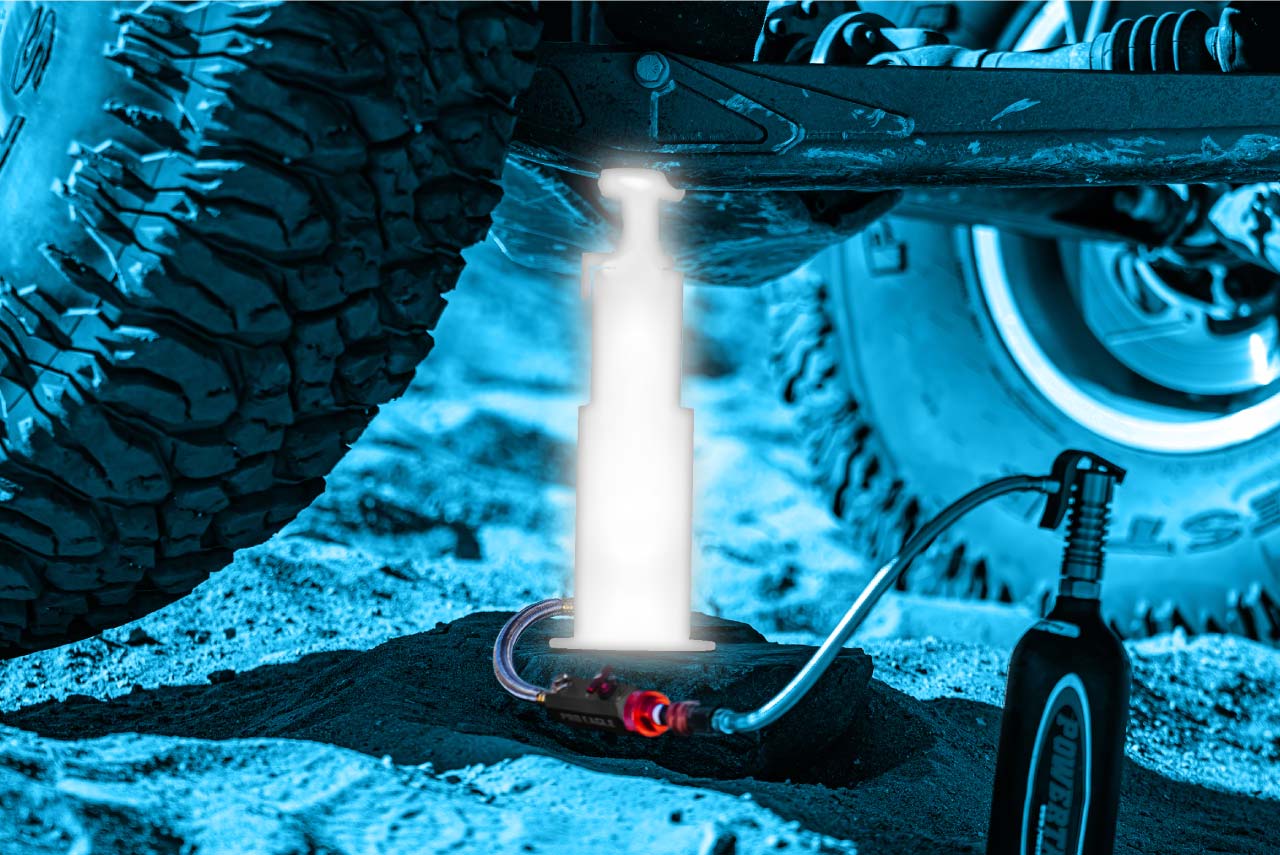 Hints at a new product to come.
We have been working hard on a product that we feel you will love. We currently offer the Phoenix Co2 jack for UTV’s and light weight vehicles. If we had to find a fault in the Phoenix jack it is that its collapsed length is 11+” tall. In some flat tire scenarios this height is just too tall. The new jack solves this and opens up more opportunities for different types of vehicles. That is all that we can say for now. Keep an eye on our social media pages for up to date release dates and information.